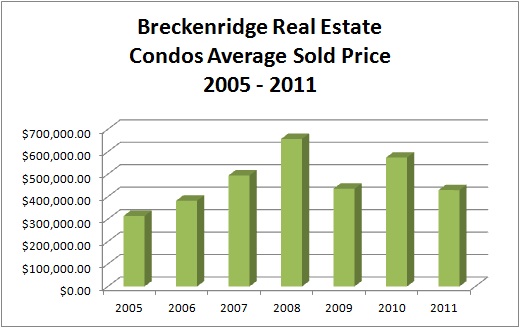 If you are considering purchasing a ski condo in Breckenridge Real Estate or just curious about how the condo market in Breckenridge is holding up, 2011 sales numbers are now out and are shedding some light on the fact that it is still a great market for buyers.  The average sold price for condos is down from last year, mostly because of the completion and Closing of the majority of One Ski Hill Place sales occured in the summer of 2010.  The average price for a condo in Breckenridge decreased to $429,180 in 2011 from $574,009 in 2010 and sold price per square foot dropped to $414/sf in 2011 from $575/sf in 2010.  Compared to 2009, the average condo sales price and average sold price per square foot is still down, pointing to motivated sellers and the continuing decline of prices for Breckenridge condos. 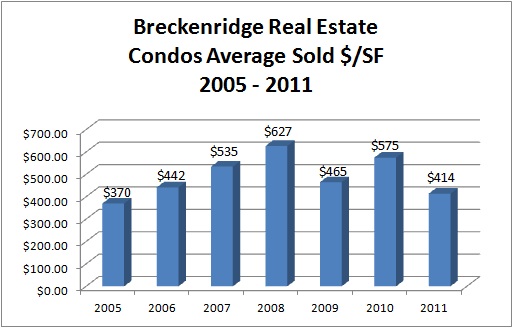 Although prices for Breckenridge condos are still down compared to recent years going back to 2006, the number of sales are trending upward. More transactions for condos are taking place which points to an increasing number of buyers taking advantage of low prices and low interest rates to get a great deal on their ideal condo in Breckenridge, CO.  2011 totalled 215 condo sales compared to only 191 in 2010 and a mere 117 in 2009. 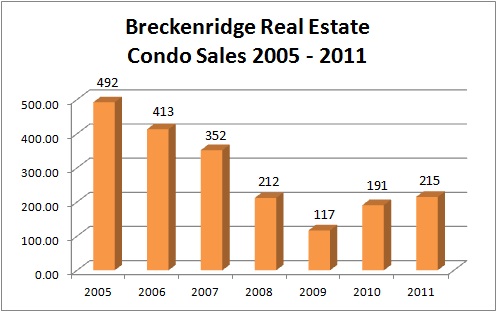 If you would like more information on purchasing a ski condo in Breckenridge CO Real Estate, contact  Krystal Knott with Christie’s International Real Estate to assist you in finding the perfect mountain property.