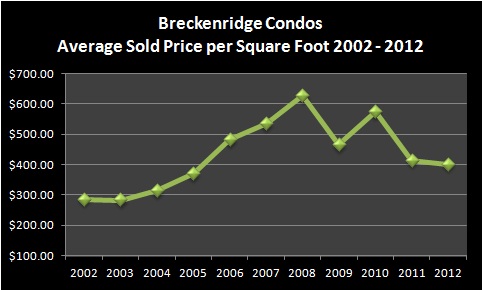 If you look at the above chart you will see there were two high points for Breckenridge condo sales.  These were in 2008 and 2010 when the average sales price was $627 and $575 per square foot respectively.  In 2008 the spike was due to the sales at the newly completed Crystal Peak Lodge and in 2010 the spike occurred with sales at One Ski Hill Place.  At year end the average sold price per square foot was $401 for 2012 which included sales at some of these newer buildings.  The average price per square foot for Breckenridge condo sales is down 36.04% compared to the height of the market in 2008. 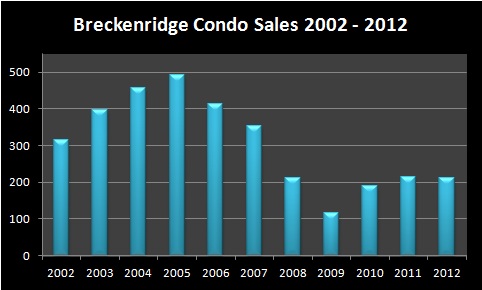 What does this mean if you are looking to purchase a condo in Breckenridge Colorado?

The long and the short of it is that prices are still down and the number of transactions is improving.  Typically when we have this combination it means the Breckenridge Real Estate market is rebounding and prices aren’t going to stay low for too much longer.