The 7th annual Breckenridge Kingdom Days celebration is this coming weekend June 15-16, 2013.  Take a step back in time to the gold mining days where saloons and brothels lined Main Street and where mining legends and stories abound.  Kingdom Days in Breckenridge Colorado is the unofficial kick-off to the summer season. 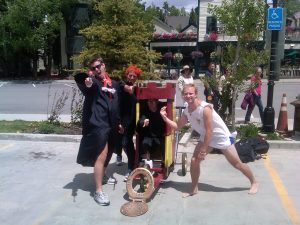 On Saturday, June 15th make sure to bring the little ones to the Riverwalk Center from 11am-5pm for magic and interactive kids games, gold panning, burro rides, train rides and a free photo booth.  The National Repertory will kick off the their season with an opening night concert of Williams’ Summon the Heroes, Rachmaninoff’s Symphony No. 2 and more at the Riverwalk Center.  Throughout the day there are many historic tours you can also attend including a tour of Barney Ford’s Victorian home, the Edwin Carter Interactive Museum, Summit Ski Exhibit, a Haunted Tour of Breckenridge and many more.  Don’t miss attending the extremely funny Outhouse Races down Ridge Street (one block East of Main Street) on Sunday, June 16th starting at 2pm right after a free concert by the Luv Brothers from 12-2pm.  Kingdom Days in Breckenridge Colorado is blast from the past and not to be missed.

Breckenridge is a wonderful town to visit during the summer with an abundance of events including Breckenridge Kingdom Days.  Love visiting Breckenridge why not consider owning Breckenridge Real Estate.  With over 14 years combined experience let Krystal Knott with Christie’s International Real Estate assist you in finding your ideal mountain getaway.  Call today at 970.333.0116 to discuss your individual criteria for a property or browse the entire Summit County MLS online.