Other exciting news for the Breckenridge Ski Resort is the opening of Peak 6 sometime during the 2013/2014 season.  Peak 6 will add 543 skiable acres, increasing Breckenridge’s overall acreage by 23%.  Of those 543 acres, 400 will be accessible via the new quad chair while the remaining 143 acres are hikable.  While the opening date has yet to be determined the new trail map including Peak 6 is set to be announced on the Breckenridge Ski Resort’s Facebook page on October 21, 2013.

If you can’t wait to get on the hill until November 8, 2013 when the Breckenridge Ski Resort opens for the 2013/2014 season you can visit Arapahoe Basin Ski Area which opened on Sunday, October 13, 2013.  A-Basin currently has 2 runs, High Noon and Ramrod open as well as the High Divide Terrain Park. 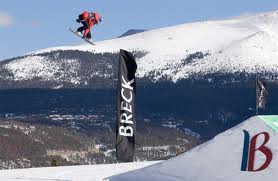 Skiing/Snowboarding is one of the best reasons to visit Breckenridge and Summit County, Colorado but there are many other winter activities that probably keep you coming back year after year.  Activities like snowmobiling, snowshoeing, nordic skiing, sledding, sleigh rides and more.  We understand that is why we live in this winter wonderland!

If you are tired of renting or sitting on I-70 trying to get back to Denver why not consider purchasing a vacation home in Breckenridge or any of the other amazing towns in Summit County, Colorado?  As full time, experienced Summit County Real Estate agents with over 14 years in the business, contact Krystal Knott with Christie’s International Real Estate at 970.333.0116.  Curious as to what is on the market, browse the entire Summit County MLS  as well.  I can’t wait to hear from you!