Corral at Breckenridge is a condo complex in Breckenridge CO Real Estate on the south end of Main Street.  A new exterior renovation was completed in November 2009, making this property feel and look brand new.  Corral at Breckenridge was built between 1996 – 1999 and has a total of 65 residences. There are 4 – one bedrooms, 32 – two bedrooms, and 29 – three bedroom units with anywhere from 800 – 1540 square feet.  All of the Corral at Breckenridge condos have balconies, some of the residences have views of the ski slopes and a few of the units have private hot tubs on their decks/patios.

If you are looking for a condo in Breckenridge Real Estate with amenities, look no further.  The Corral at Breckenridge has elevators in every building, 2 fitness centers, oversized community hot tubs, a business center, meeting room, game room with a pool table, foosball, air hockey and a 55″ television.  Some of the condos have detached garages, the units that don’t have a garage have the option of having large private lockers. 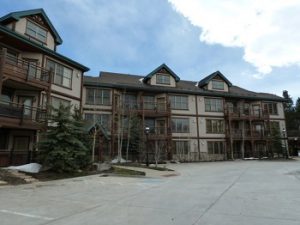 There don't appear to be any properties matching your requirements!